Chase fidgeted on Jacob’s shoulder, impatient for his idea to come to fruition. He was pretty sure Bobby would be home, and the guy hadn’t met Jacob yet. What better way to introduce him?

He grinned at the first sign of movement past the curtains. A hand grasped cloth and Chase leaned forward eagerly. The way Jacob knelt by the house, Chase had a perfect view of Bobby’s face as it came into view. The curtain swept aside, and–

“Oh what the fu-” Bobby blurted, falling out of sight as quickly as he’d appeared.

END_OF_DOCUMENT_TOKEN_TO_BE_REPLACED

Jacob couldn’t think of a worse idea, but Chase convinced him anyway. He had a way of making bad ideas seem minor. Any concerns about them were met with fast, reasonable reassurances.

Until the plan was in action. Then those same reassurances were trampled by not-so-theoretical concerns.

Case in point, it thrilled no one that a giant stood in the street. He hadn’t stepped on anything or bumped into buildings, but all the same he took up a lot of space. Even trying to stay out of the way, he couldn’t avoid blocking the way. He really wished he hadn’t listened to Chase.

END_OF_DOCUMENT_TOKEN_TO_BE_REPLACED

In Bowman of Wellwood, Jacob Andris was originally going to be a side character. Instead of the chill giant becoming Bowman Leafwing’s best friend among all humans, that honor was going to fall to Bobby Loran.

That’s right, Bobby, who readers may know is not a gentle or calm person at all, was going to be the human that helped Bowman learn how to accept people so vastly different from himself. Then, as the story progressed and I played with different approaches, the truth became clear. Bobby and Bowman will never get along, while Jacob is the perfect personality to ground out the sprite’s wild, sassy nature.

6. Favorite character you ever created.

Ha! I think every single response I got to this game so far went for #6.

The answer for this has to be Bowman Leafwing. He’s had his ups and downs, and he’s changed a lot from the first inkling I ever had of him, and he’s my baby. I have a lot of really close candidates for the top spot here, but I have to stick with my roots and say it’s the leafy boy.

Without a doubt I love writing the character who is physically weak/small/frail/etc but is also the most outgoing/bold/SASSY out of anyone. Tiny, but fierce!

I would say Bobby Loran might be the toughest one for me to write. Other than his scenes where he goes off the rails, he could really go in any direction and I don’t often know until a scene is in progress.

99% of the time the answer to this one is Jacob Andris. He’s such a chill dude, and his gentle nature makes him easy and fun to write for. He saves room for cheekiness sometimes, and even then it’s all in fun and he never means any harm. It’s hard not to get along with Jacob eventually.

Oh my gosh I just found your blog from your Camp NaNo stuff and it’s super cool. Who are Chase and Bobbie though? Your characters?

Ahh, thank you! I’m so glad you enjoy my blog!

Chase, Bobby, and Jacob are some characters from a story of mine not related to my current NaNo project. In their original story, Bowman of Wellwood, they’re all humans who encounter a little sprite named Bowman Leafwing while on a camping trip. The story is now available in its entirety!

Of course, I always like to throw my various OCs into AU situations, so there’s a lot of that here in lieu of their original story!

I imagine Bobby wouldn’t believe the ease Chase has around giant Jacob until he sees it for himself. That or his family is the owner of the lands Jacob ends up working on to raise the said cattle (probably not a viable, long term food source for Jacob, but definitely for a job) and first meetings end up being… entertaining

I’d actually planned on Jacob living somewhere on Chase’s family’s land (because for this story they have some, for plot convenience and such, and it’s not like they aren’t well-off in canon anyway). But Bobby would definitely have a lot of misgivings about an honest-to-God giant living nearby, at first because it’d just make him nervous but then he’d just be confused. Chase is small and frail; how the heck can he keep that giant in check so well?!

The first meeting, though, is definitely something I want to write out when I get the time. It’d be just impossible for Bobby to stay away for too long, nerves or not. He’d probably mouth off about something and get himself poked. The teasing would be endless.

Is Blefuscu still around? It would be funny if Bobby lived there

I think Blefuscu is still there! Probably right across the bay, and hopefully in much better relations with Lilliput at this point. Jacob wouldn’t make a very good war machine, as he’s just too much of a teddy for it.

Bobby is in Lilliput though, somewhere. Chase will have to introduce his old friend to his giant someday. 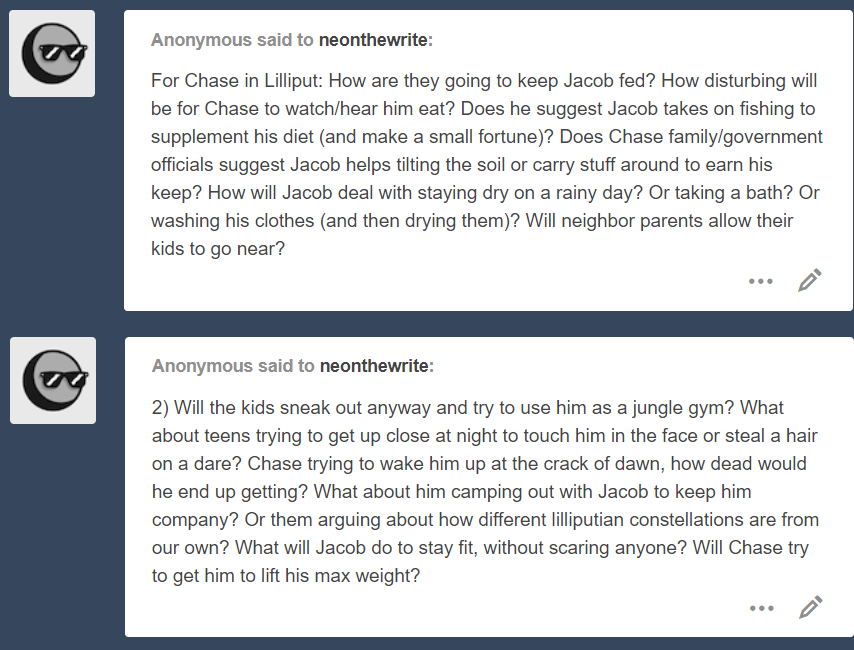 Ahhh, so many great questions! I’m so excited to receive all of these and get myself thinking about these guys again. ❤

A lot of these should be made into drabbles eventually. There’s never too much Chase and his giant Jacob.

For the care and keeping of the giant, I imagine him being allotted his own area in some unfarmed land, with a pond or something to use. He’s familiar with roughing it, so he’d probably know some tricks to keep himself sorted out there. As for food, he could start raising his own herd of cattle, either as a hired hand for someone or the city, and he could have that as a source of food. Fishing is another good idea, though he’d have to make sure he didn’t overdo it and take all the catch from the Lilliputian fishermen!

As for Chase, I think he’d have to take some time to get used to the sight of a giant eating. Almost anyone would, really. But he also knows for certain that Jacob won’t hurt anyone, so that will help him adjust a lot.

If Jacob got caught out in the rain, he might not be able to keep himself dry very easily, but at least the raindrops would be small for him! And he could be an umbrella for his tiny buddy. Those two will end up hanging out a lot, probably arguing about all kinds of things and teasing each other. It’d be just like in their canon stories, but with Jacob as a great big giant marshmallow instead!

I definitely need to do something for the other townsfolk (and kids especially) getting used to him. I’ll have to include Bobby Loran somehow, right? 😉

I’ve been holding onto this one for a bit because I’d really like to turn it into an actual prompt and write something out for it, but the specific idea hasn’t come yet, so I’ll answer it like a normal person and just hold onto it. 😉

First, a little introduction of Bobby Loran, Jacob and Chase’s third buddy, since I’m pretty sure I have people following that have no idea who he is:

Bobby is such a tool about things, at best. He has this old notion of “bigger = in charge”. He feels like he has to act more tough and arrogant in order to be the “leader” of the group. In reality, their group doesn’t really have a leader and he’s just a dork for nothing.

It does make him quick to assume that anyone tiny (say, a little leaf-winged sprite) is automatically less. Until someone (say,  his gigantic friend) punches some sense into him. He can be taught how to correct his mindset, but someone’s gotta be direct with him.

Dude would panic. He’d be so scared of what the bigger person might do, partially because he assumes they might be like him. It’s great to make those self-realizations about yourself, but right in that moment certainly wouldn’t feel good for him. ^^;  It doesn’t help that if it were Bowman, the sprite would probably tease him a lot, even without hurting him.

If he was little around his friends, he’d sulk so much. Like the most sulking they’d ever seen out of him, all condensed into one teeny body. Once he got over the shock, he’d become even more bossy than usual in order to try to save face for panicking.

These three have been friends for quite a while by the time Bowman of Wellwood takes place. Even still, the events of the story tested their friendship at points, to be sure!

Chase and Jacob met each other first. When they were about 9, Jacob had barely put a year between himself and the death of his father. He became a much quieter kid around then, keeping to himself a lot more. This enabled him to notice another kid doing the same thing, though for very different reasons.

Qi Shi Lisong, nicknamed “Chase” by his dad to give him a more Americanized name, didn’t speak a lot of English when he and his family first moved to Jacob’s hometown of Carlisle, Iowa. Things had been rushed to get them moved, so he and his little sister didn’t have a lot of time to learn much before the move. He was incredibly shy and also dealing with his recent asthma diagnosis.

Jacob approached this shy kid and the rest, as they say, is history. Jacob helped Chase learn English faster (a side effect of this being that they sometimes talk similarly) and they played together at each other’s houses. They’re very close, and a part of that is probably because they took comfort in the friendship that came about right when they needed it the most.

A few years later, Bobby Loran moved to Carlisle from Texas, a definite contrast to the other two more laid back kids. The three of them ended up hanging out more and more often as a coincidence at first, and eventually he was in the fold as well. The three are known among their classmates as inseparable most of the time, a matched set.

Bobby thinks he’s the leader of their group. Chase doesn’t care. Jacob shrugs and lets him think that. They give each other endless shit regardless, and they really are close.

(Artwork by the wonderful @creatorofuniverses )