I had to return to the fun little AU in which Oscar met Castiel, Angel of the Lord. And, inevitably, I had to see how Oscar would fare with the rest of Team Free Will.

I split it into fairly large pieces (chapter length each). The DA Link above is for people who don’t want to read all that while scrolling tumblr.

Oscar was out of breath by the time he returned home. His frantic glances gave his house in the walls a warped, scary appearance. Normally, home was safe. It was drafty at times and he couldn’t let dust collect for more than a day before it overran him, but it was home. He could go there after a day of foraging supplies and sit on his ring box chair to sew or burrow into his blanket nest to sleep.

Now, he couldn’t stay. It wouldn’t remain safe for long.

END_OF_DOCUMENT_TOKEN_TO_BE_REPLACED

So, work has been a real pill for @nightmares06 and @neonthewrite both, with night especially taking on a lot of shenanigans that really suck the energy out of the entire day. It’s nuts, folks. We have the upcoming Zelda game coming out to look forward to, but in the meantime I (neon) decided to write a little fluff, and we’re gonna share it with you. Enjoy!

Dean walked briskly, his hands shoved in the pockets of his jeans. So long as he didn’t dawdle on his way, people probably wouldn’t notice him. It was a tried-and-true method for sneaking around in plain sight. Dean was no stranger to that. He was no stranger to sneaking into places without paying the admission, either.

He’d never done anything like this before, though. The weight of the responsibility was a lot heavier than the small weight in his front pocket. He couldn’t mess this up.

END_OF_DOCUMENT_TOKEN_TO_BE_REPLACED

This one, as shown in the picture, came in to @brothersapart, but I had an idea for the Food and Monsters storyline, Oscar’s original home.

Timeline: The morning after the end of Salads and Sulfur

It was unusual for Oscar to care about how much he overslept. His routine for his entire life had been to sleep when he was tired, and after helping Sam and Dean Winchester hunt down a demon, he’d gone to bed exhausted. The day before ran together in a long chain of scary events, many of which he’d witnessed from inside a pocket.

Oscar hadn’t yet had time to come to terms with everything, and he was already in the vents, wandering back toward that room. Back to the odd pair of brothers he’d befriended despite how crazy they could be.

If his memories were to be believed, their insanity had rubbed off on him.

In spite of himself, he was glad to hear a familiar gruff voice filtering into the air ducts. They were still there, even though he’d slept into the morning. He found that he wouldn’t even mind if breakfast was gone already. He could at least see them off before they left.

See the rest on Archive of Our Own along with the rest of the Salads and Sulfur story! 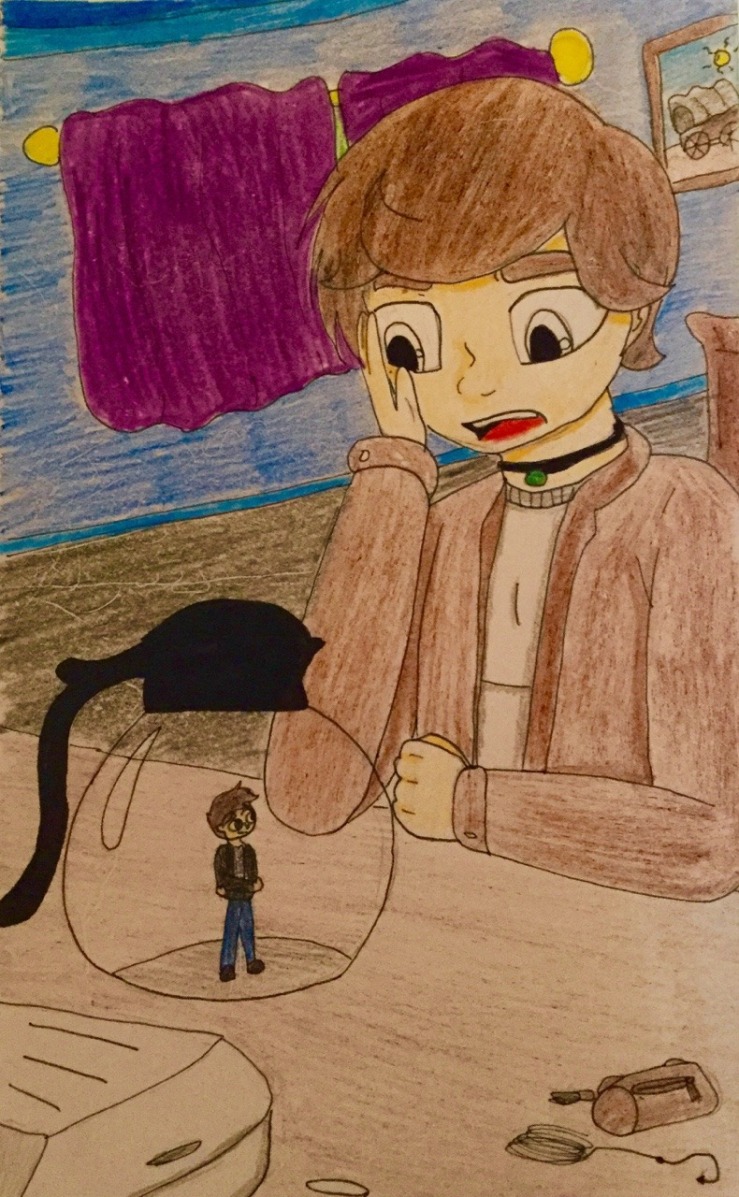 The pie that led Dean there in the first place vanished into the depths of the mini-fridge, forever out of reach for anyone his size. The way the fridge was designed with the airtight seal rendered it beyond their ability to open. If they could ever find a way to get in, getting to the food itself would be child’s play. The hooks they used for climbing would catch on the shelves and railings of the fridge without a problem. Dean’s bag was bigger than Sam’s, and he used every bit of that space when they were out searching for supplies. If he could fill it with food that he knew went to waste in the motel’s mini refrigerators …

Dean stared back up at the human’s words, his face clouded. The entire reason he was in the room was now out of reach, and he realized it always had been. He’d put both himself and Sam at risk for it. The only shining light was Sam evading capture. If their roles were reversed, he’d never forgive himself.

As he always did, Dean put his trademark snark to good use building a wall around his emotions. “If you didn’t go causing earthquakes with your big stomping feet, I wouldn’t have to be a ninja,” he griped up at Jacob, letting years and years worth of resentment shine through in his tone with a convenient target for it in sight. His voice bounced back at him from the glass, only fueling his frustration. “You left the pie out, that made it fair game.”

“Is that so,” Jacob answered through a chuckle that he poorly concealed. It was very difficult for him not to find that teeny tiny glare and endless sass entertaining. Whoever this guy was, whatever he was, he was funny. Jacob really hoped they could come around to some kind of understanding soon.

Excerpt from The Road Not Taken 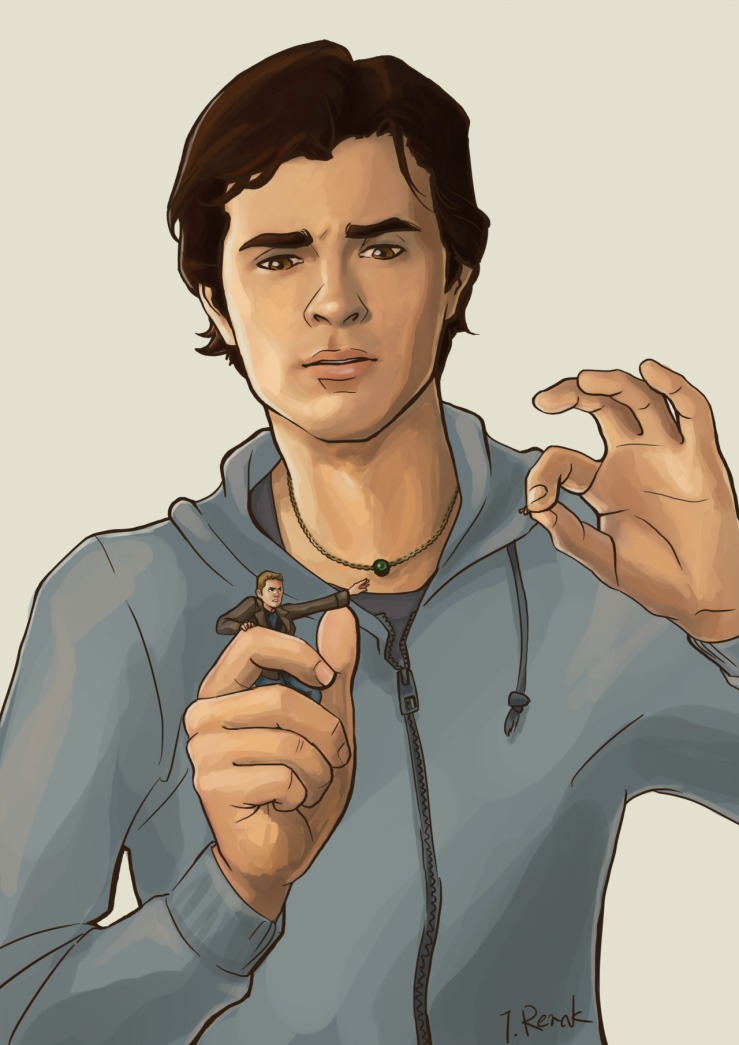 “C’mon,” Jacob muttered, getting his finger and thumb pinched on the flat of the blade. It was delicate work, he realized, seeing that tiny hand clenched around the handle with a certain white-knuckled desperation. Jacob didn’t want to break the little weapon or the hand holding it, but he didn’t want to get sliced up either. It had to go, at least until he could calm the tiny man down.

The man fought back against his motions with a growing desperation, but nothing could stop the knife from slowly being pulled free of his grip. Jacob could have sworn he could feel the small legs trying to push against the inside of his fist for leverage during the short tug-of-war. One that he would have won instantly if he wasn’t doing his best to not hurt the little guy. Those fingers were tiny.

Once he managed to wrestle the knife free, he immediately set it down next to the tiny leather duffel bag for safe keeping. He stared with a faint frown at the cut on his finger before looking back at the little guy in his fist with a bemused look. “Gotta admit, I didn’t see that coming. Where’d you even get a knife like that?” he asked.

“What’s it to you?” Dean griped, still doing his best to struggle free of the constricting fingers wrapped all the way around him. “I don’t think they come in your size, Sasquatch!” The last thing he was going to do was open up to his captor and go Oh, hey. I made that as a test run for a present I wanted to make my little brother. Silver blade and all.

Excerpt from The Road Not Taken.

This is actually a pretty straightforward question. The sprites don’t follow any traditions/beliefs pertaining to a menstrual cycle, because they don’t have one. Despite appearances, they are not closely related to the Great Ape family, and that’s actually one of the only types of mammal that has a cycle.

Sprites, all of my sprites, are Spirit-made, so even though they look a lot like humans there are a handful of biological differences (in the case of the wood sprites, they’re actually part plant so that right there opens up a bunch of differences).

Jacob, explaining this to Dean in Brothers Asunder:

Jacob frowned, feeling a little like a bad guy for what he was suggesting. But, as the only one good to drive the car, he knew that he had some room to insist. Dean needed the rest. Another glance down at Bowman showed that he needed it, too.

It also gave Jacob an idea. He reached out and gently scooped his hand under Bowman. The sprite flopped over on his hand before sitting up sluggishly, blinking slowly. His wings hung slack.